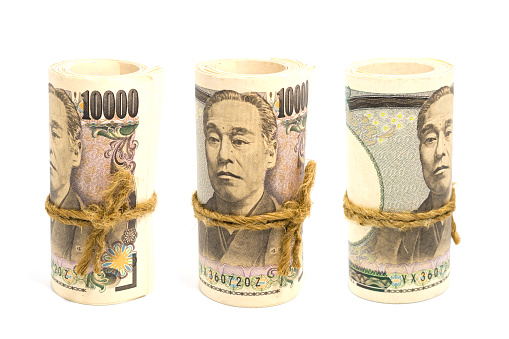 Renewed surge in US treasury yields overnight sent stocks lower. Risk-off sentiments continued in Asian session general. Australian Dollar is currently the worst performing one for the day, weighed down further by weak retail sales data. Canadian Dollar is following as second weakest, as oil priced tumbled. Swiss Franc, Yen and Dollar are the stronger ones, with Yen shrugging off BoJ’s policy announcement. Overall, it should also be noted that all major pair and crosses are now back inside last week’s range.

US 10-year yield accelerates up again, targeting 2% next

Selloff in US treasuries was again the major theme in the markets overnight. Both 10- and 30-year yield jumped sharply and closed at the highest level since the pandemic. Fed was clear that it’s not going to tweak its asset purchases for now, and gave a nod to the rise in yields. Investors were betting on improving outlook and the return of inflation through this year’s transitory spike.

30-year yield is ahead of 10-year yield in the development. TYX has taken out corresponding resistance zone with yesterday’s rise. That is, 2.443 resistance and 61.8% retracement of 3.455 to 0.837 at 2.455. We might further rise in TYX if it could sustain above the current this resistance zone. Though, long term channel resistance at around 3% should cap upside.

Oil price plunged sharply overnight on the worst selloff since last September. Concerns over slowdown in global vaccination was a factor that triggered pull back in optimism over oil demand. More than a dozen European countries are still suspending AstraZeneca. Even UK, the best performer in vaccinations, warned over significant reduction in weekly supply from April, relating to manufacturing issue in India.

Technically, WTI’s failure to sustain above 65.43 structural resistance at this first attempt is not too surprising. A short term top should have be formed at 67.83 with breach of 59.17 support. Focus is now on whether WTI could hold on to the support zone between 55 day EMA (now at 57.97) and 59.17. If so, sideway consolidation should follow for the near term, to digest recent up trend, and build the base for another rally. However, firm break of 57.97/59.17 support zone would trigger deeper pull back to 38.2% retracement of 33.50 to 67.83 at 54.71 at least. 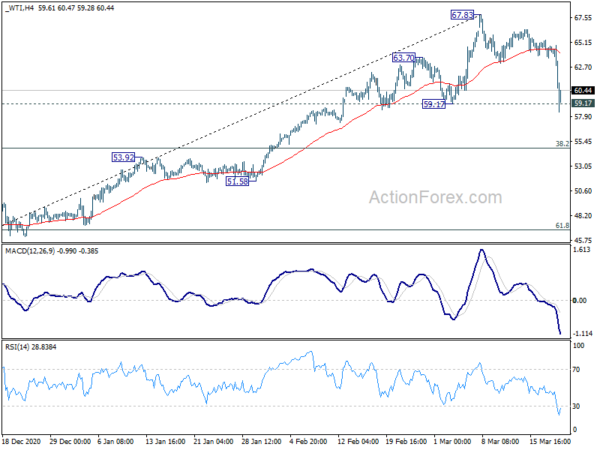 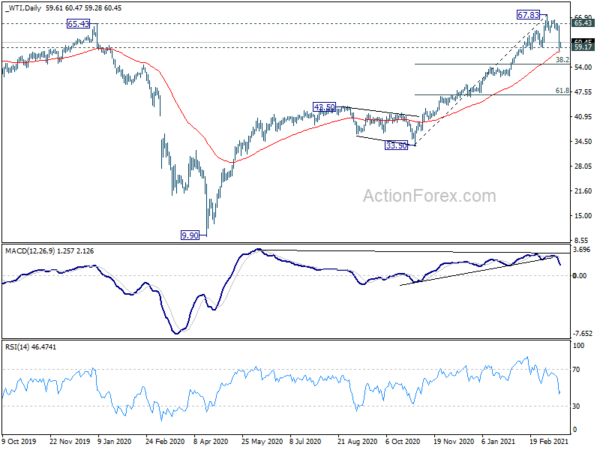 Three major changes are announced by BoJ today, as results of the policy review. Firstly, short-term interest rate is held at -0.1%. An “Interest Scheme to Promote Lending” will be established to enable the central bank to “cut short- and long-term interest rates nimbly while considering the impact of the functioning of the financial intermediation”.

Secondly, 10-year JGB yield target is kept at around 0%. But it’s now allowed to fluctuate in a wider band between plus and minus 0.25%. A “fixed-rate purchase operations for consecutive days” will be introduced to set an upper limit on interest rates when necessary.

Thirdly, BoJ will purchase ETF and J-REITS with upper limits of about JPY 12T and JPY 180B respectively. But the reference to JPY 6T annual ETF purchase target was dropped.

Australia retail sales dropped -1.1% mom, or AUD -346.5m, in February, worst than expectation of 0.4% mom rise. The falls were led by Victoria (-4%) and Western Australia (-6%). Both states saw COVID-19 lockdown restrictions during the month.  Partially offsetting falls in these states were rises in New South Wales and Queensland, which had seen COVID-19 restrictions impact January.

Germany PPI and UK public sector net borrowing will be released in European session. Canada will release retail sales later in the day.

Range trading continues in USD/JPY and intraday bias remains neutral for the moment. With 108.33 minor support intact, further rise is expected. On the upside, break of 109.35 will resume the rally from 102.58 to long term channel resistance at 110.02 next. Decisive break there will carry larger implications. However, on the downside, break of 108.33 will indicate short term topping. Intraday bias will be turned to the downside for correction. 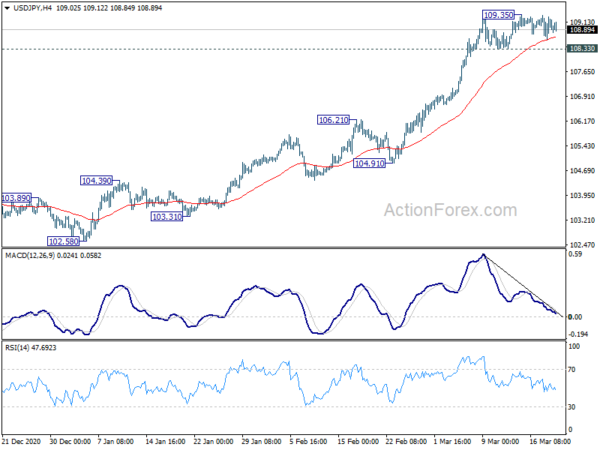 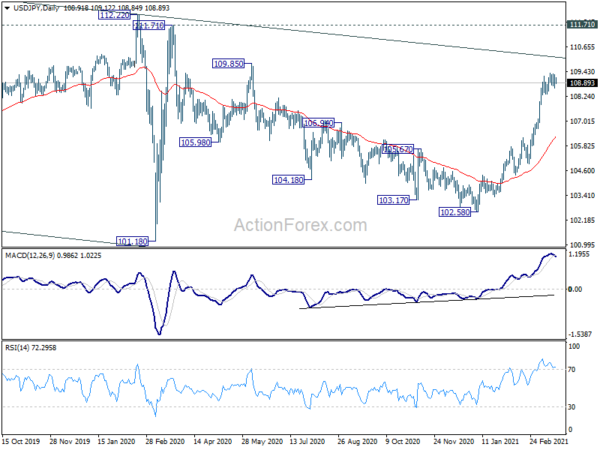