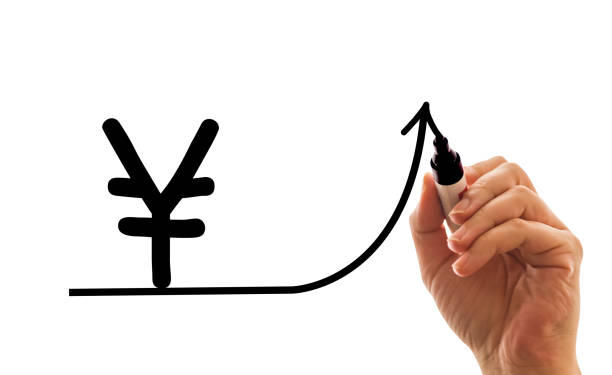 Yen buying accelerates today as selloff in commodity currencies intensified. New Zealand Dollar is trading as the worst, by some distance, followed by Aussie. Canadian Dollar is dragged down by decline in oil prices, while Sterling is also pressured after poor job data. On the other hand, Dollar is following Yen as the second strongest, then Euro. Fed chair Powell will testifies today, but unlikely to offer anything more than his usual “balanced” rhetorics.

Technically, one focus now is on USD/JPY, with today’s decline. Break of 108.33 minor support will bring deeper near term correction, and could drag other Yen crosses lower. GGBP/USD’s break of 1.3777 suggests resumption of the corrective fall from 1.4240. Another focus is now on 0.8638 minor resistance in EUR/GBP and break will revive the case of near term bottoming. 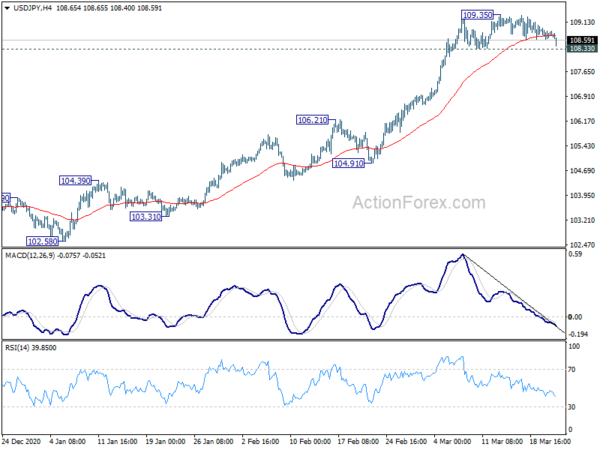 Dallas Fed President Robert Kaplan said in a CNBC interview said his economic forecast has “improved meaningfully”. He’s expecting 6.5% GDP growth this year while unemployment rate would fall back to 4.5%.

He will advocate for scaling back stimulus after “seeing real outcomes, not just forecasts”. But still, he’s forecast for removing accommodation is “more aggressive than the median Fed official. He’s expecting Fed to start hiking interest rates in 2022.

ECB Lane: The parameters of Europe’s fiscal debate moved with US stimulus

ECB chief economist Philip said there will be “positive spillovers” from the USD 1.9T pandemic relief package from the US. The significant package will “boost global GDP, will boost exports from the euro area”.

“Of course, the initial impact was visible more in the financial market, but over time, as this stimulus gets rolled out, it will be a significant engine for the world economy,” he added.

In Europe, “we have 19 fiscal policies and then we have the joint fiscal action,” Lane said. “The parameters of the fiscal debate have clearly moved with the US decision. And it is an important issue for European policymakers to reflect upon.”

In the March monthly economic report, Japan’s Cabinet office maintained that the economy “shows weakness in some component” as it’s picking up in a “severe situation due to the pandemic. In particular, export assessment was downgraded from “increasing to “increasing at a slower pace recently”.

Other assessments were generally unchanged, with private consumption in a “weak tone”, business investments “showing movements of picking up”, industrial production is “picking up, corporate profits are “picking up as a whole”, employment shows “steady movements” in some are but weakness remains. Consumer prices were flat.

WTI dives back below 60, below holding above 55 D EMA

WTI crude oil drops sharply today and it’s back below 60 handle. It’s weighed down by renewed concerns over return to lockdown in Europe, as well as slow vaccine roll outs.

Nevertheless, WTI is still holding above last week’s low at 58.31 for now. We’d continue to wait and see if it could defend 55 day EMA (now at 58.23) for the second time. Rebound from the current level will maintain near term bullishness, for extending medium term up trend through 65.43 structural resistance.

However, sustained break of the 55 day EMA will indicate that WTI is in a medium term correction. Deeper fall should be seen to 38.2% retracement of 33.50 to 67.83 at 54.71 at least, before the correction completes. 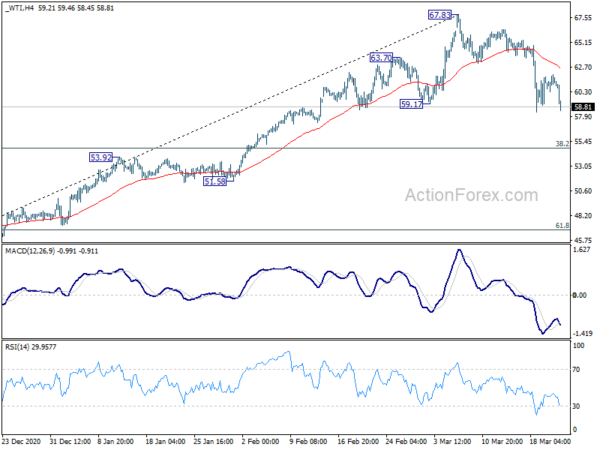 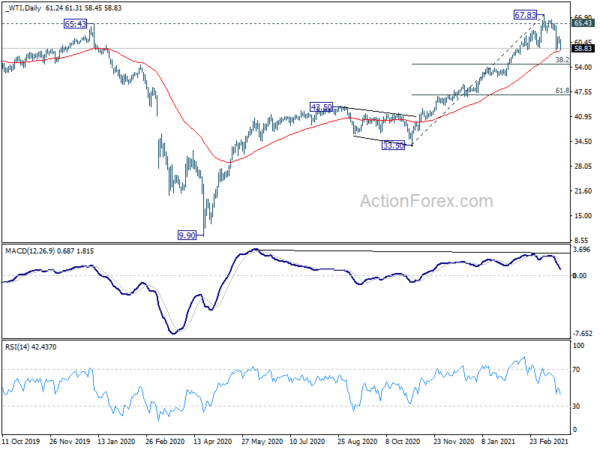 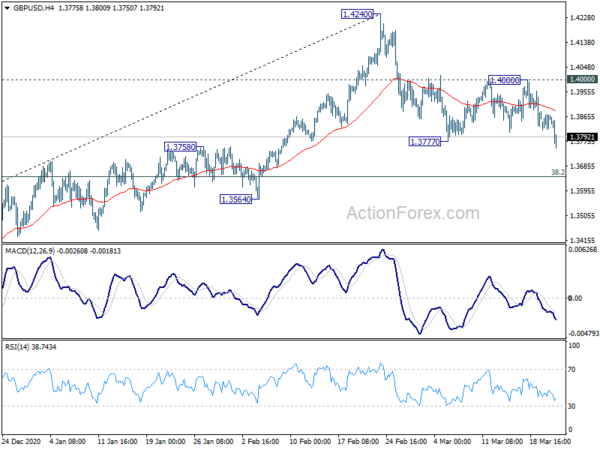 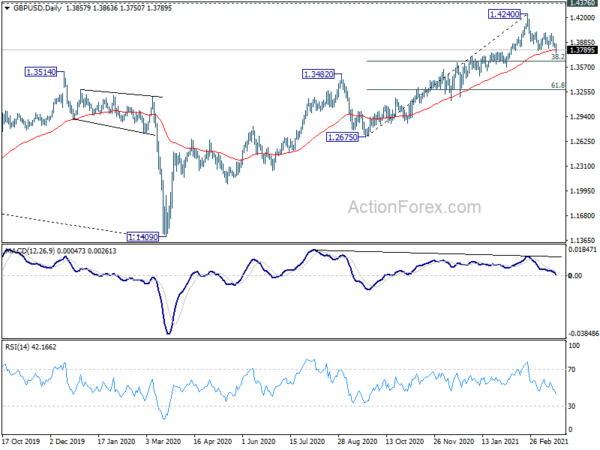 Food prices fell sharply in July — but the respite may not last
Gold marginally lower; silver falls Rs 487
Gold prices near one-month high; should you buy the yellow metal?
Cash withdrawals in the UK soar as Brits grapple with the rising cost of living
AUD/USD Price Analysis: Sellers eye 0.6800 as a bearish-engulfing candle pattern emerges