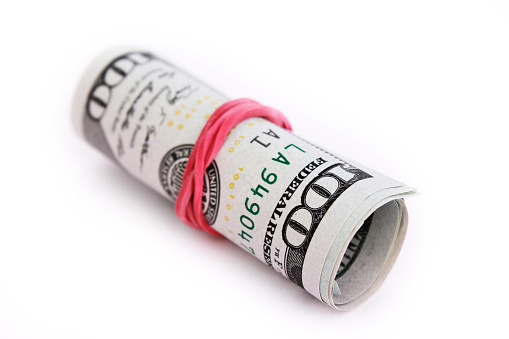 Dollar and Yen recover mildly in a mixed Asian session today, while commodity currencies are mildly today. But major pairs and crosses are all bounded inside Friday’s range so far. China data provided some support to Hong Kong and China stocks but Japanese Nikkei is in another sharp decline. Gold is extending near rebound, while Bitcoin is in free fall again.

The National Bureau of Statistics said that the economy showed “steady improvement” in April, but the foundation was “not solid” as new problems are emerging. Recovery also remains “uneven”. It expected the economy to operate within a reasonable range.

Hong Kong and China stocks trade mildly higher in Asian session after the releases, but lack clear momentum for sustainable rebound. HSI is up around 0.5% at the time of writing. The index will have to overcome 28250.60 support turned resistance to confirm short term bottoming. Otherwise, it remains vulnerable for another selloff through 27505.08 support to resume the larger decline from 31183.35. 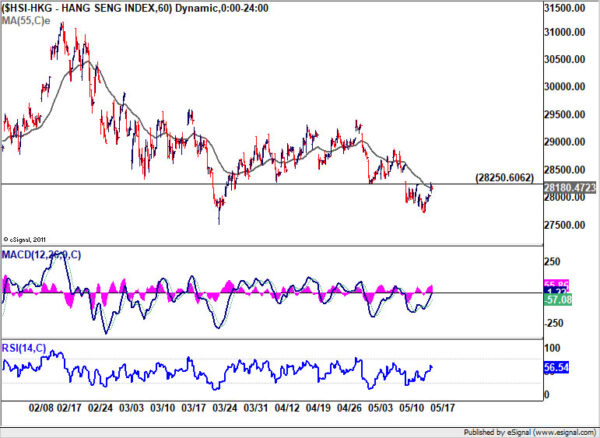 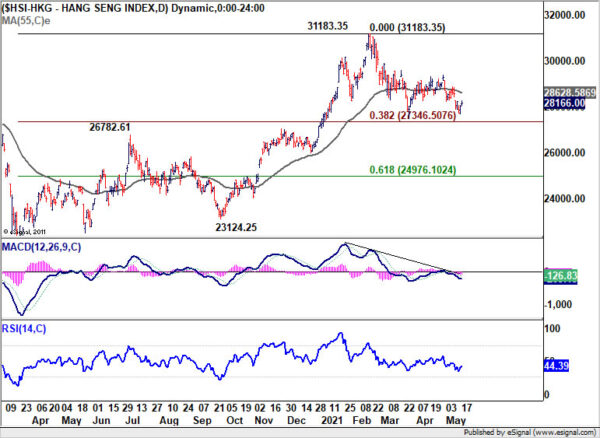 We’re favoring the case that correction from 2075.18 has completed with three waves down to 1676.65 already. Sustained break of the channel resistance will add more credence to this view. Stronger rise should then be seen to 1959.16 structural resistance for confirmation.

Outlook will stay bullish now as long as 1808.59 support holds, in case of retreat. But break of 1808.59 will suggest rejection by the channel resistance, and bring steep reversal. 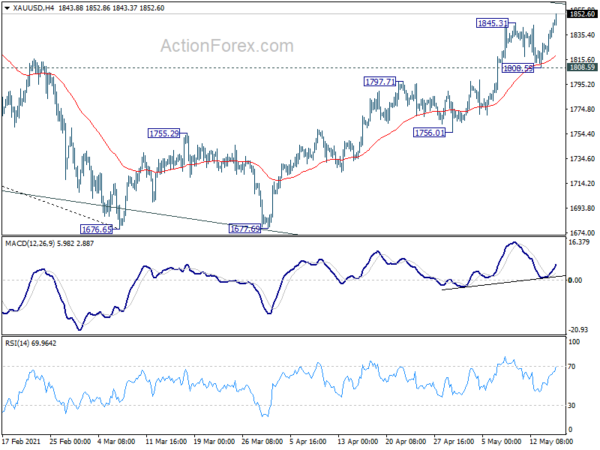 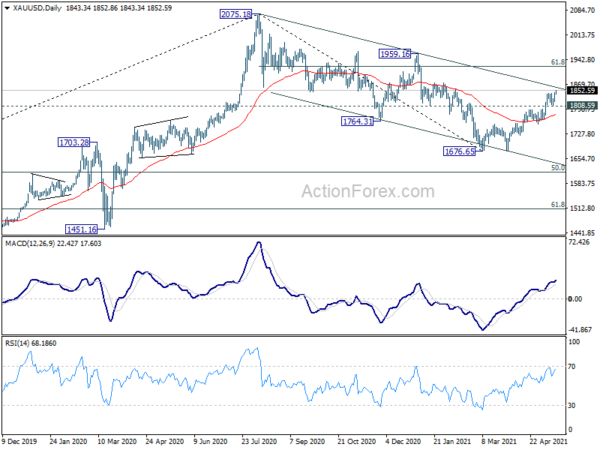 Bitcoin is in another steep selloff after Tesla CEO Elon Musk implied that the company might sell its holdings. A self claimed “crypto analyst” @CryptoWhale tweeted, “Bitcoiners are going to slap themselves next quarter when they find out Tesla dumped the rest of their #Bitcoin holdings. With the amount of hate @elonmusk is getting, I wouldn’t blame him…”. Musk replied “indeed”. 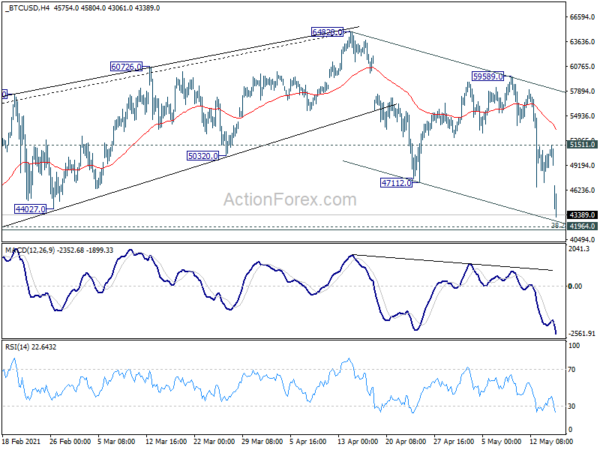 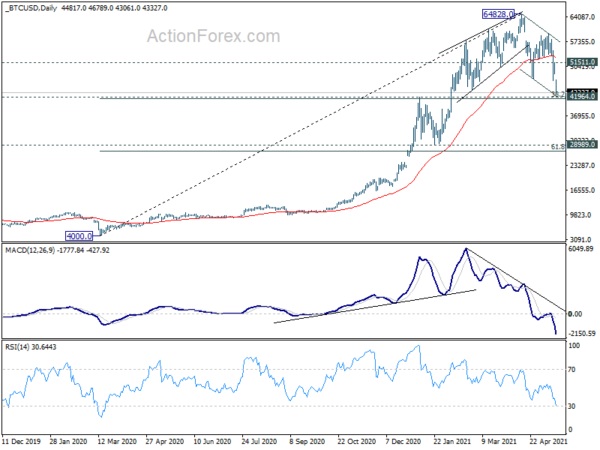 Inflation, activity and employment data to be watched

Some inflation, activity and employment data will the major focuses this week. In particular, CPI data from UK, Canada and Japan will catch most attention. Also, US Empire State, Philly Fed survey and PMIs; Australia PMI, Eurozone PMIs and UK PMIs will be watched. Additionally, employment data from UK and Australia will be featured too. Besides, RBA and Fed will release meeting minutes. Here are some highlights for the week:

Intraday bias in USD/CHF remains neutral for the moment as consolidation from 0.8984 is still extending. Another rise cannot be ruled out, but outlook stays bearish as long as 0.9163 resistance holds. On the downside, break of 0.8984 will resume the fall from 0.9471 to retest 0.8756 low. 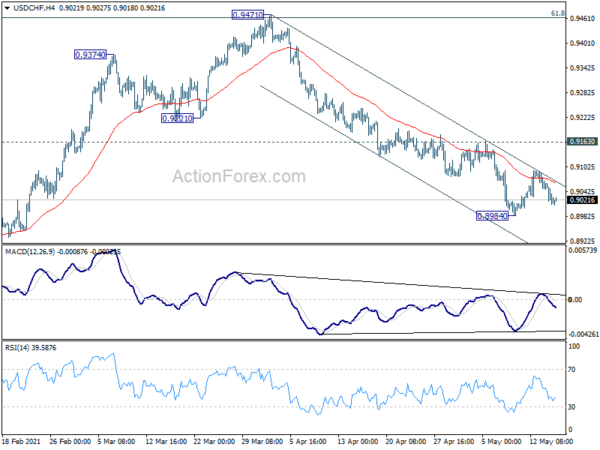 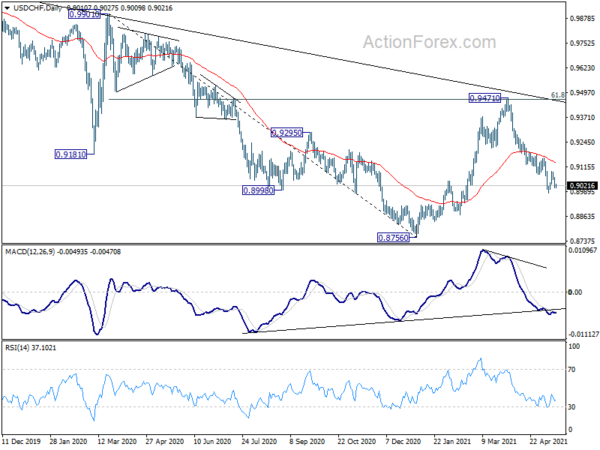