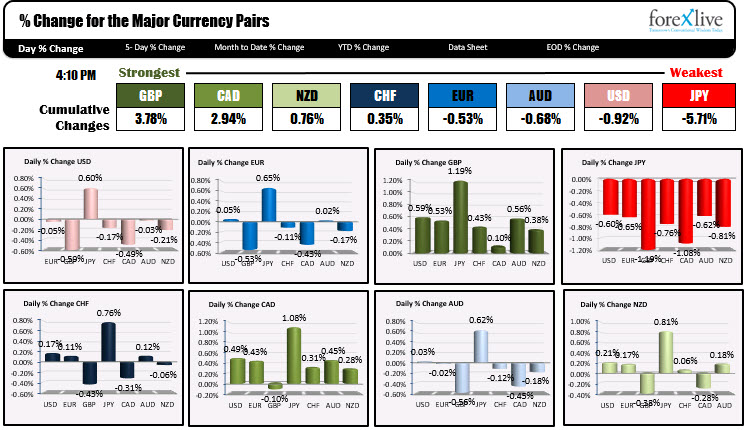 A look at markets as the day comes to a close:

The GBP and the JPY were the big movers today. Versus the USD, the GBP was sharply higher (lower USD) on the back of BOE’s Vlieghe comment that an early rate hike is possible if there is smooth transition from furlough. The JPY meanwhile was sharply lower vs the USD as traders reacted to higher yields, and some break away technicals.

Month end flows may have also been in play in the forex market (and other markets for that matter.  The month end is not until Monday, but both the US and UK will be closed on Monday due to a holiday.  As a result, month end flows could have been playing a bigger role in the markets today (and will likely be the same tomorrow as well).

In the US debt market today, yields moved higher, but did come their highest levels after a successful seven year note auction (tail of -0.6 bps, bid to cover comfortably above the six month average signaling strong investor demand).  Nevertheless, the 10 year yield is up close to 2.9 basis points.

In the US and European stock indices today, results were mixed.  In the US, the NASDAQ index fell marginally. The Dow and S&P were up marginally. The small-cap Russell 2000 rose by around 1.07%.

In Europe, the German DAX, UK’s FTSE 100, Spain’s Ibex or lower on the day, while the France’s CAC, and Italian FTSE MIB rose.

Some key technical levels going into the new trading day for some of the major pairs.

Tomorrow, the Fed’s preferred measure of inflation (PCE) will be released with expectations for a year on year increase to 3.5% for the headline number and 2.9% for the core. The core increases up from 1.9% in March but the rise is reflective of the base effects mostly. The Fed has said numerous times that they would not react to what they consider transitory inflation. However will the market? Be aware.