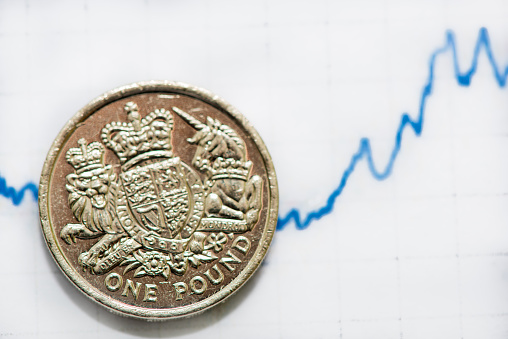 Sterling jumps broadly today as a BoE officials indicated that rate hike could come next year. UK Prime Minister Boris Johnson also said there is nothing in data that suggests a delay to reopening on June 21, even though some more time is needed to assess the situation. Nevertheless, Canadian Dollar is even stronger for now. On the other hand, Swiss Franc and Yen are the worst performing ones, following rise in treasury yields. US 10-year yield is back above 1.6 handle ahead of US session. 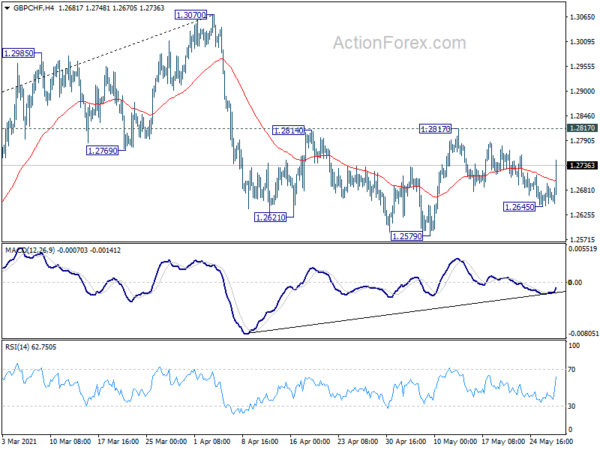 US durable goods orders dropped -1.3% in Apr, first decline in a year

US initial jobless claims dropped to 404k, lowest since Mar 2020

According to second estimate, US GDP grew 6.4% annualized in Q1, unrevised. Upward revisions to consumer spending and nonresidential fixed investment were offset by downward revisions to exports and private inventory investment. Imports, which are a subtraction in the calculation of GDP, were revised up.

BoE Vlieghe: Probably take until Q1 to see when a rate hike is appropriate

BoE policymaker Gertjan Vlieghe said in a speech that, his central scenario for the economy sees “somewhat more slack” that the MPC’s central projection. He worried that “the transition out of furlough does involve a modest rise in the unemployment rate”. But even in that case, “the first rise in Bank Rate is likely to become appropriate only well into next year, with some modest further tightening thereafter.”

On the upside, “the transition out of furlough happen more smoothly” with unemployment at or at little below current levels by year end, and with associated signs of upward inflation and wage pressure beyond the temporary and base effect. Then, “a somewhat earlier rise in Bank Rate would be appropriate”.

Still, “It would probably take until the first quarter of next year to have a clear view of the post-furlough unemployment and wage dynamics, so a rise in Bank Rate could be appropriate soon after, along a slightly steeper path than in my central case.”

Germany Gfk consumer sentiment for June improved to -7.0, up from -8.6, but missed expectation of -5.3. Economic expectations jumped sharply from 7.3 to 41.1 in May, hitting the highest level in more than three years. Income expectations surged from 9.3 to 19.5. Propensity to buy, however, dropped from 17.3 to 10.0.

Rolf Bürkl, GfK consumer expert comments on the subject: “We are leaving the third wave more and more behind us, the incidence values have been decreasing significantly for several weeks. And we are also making great progress when it comes to vaccination. As a result, loosening of restrictions and a reversal of the strict lockdown are possible. This primarily fuels economic optimism and creates a mood of economic optimism at the moment.”

From Swiss, trade surplus narrowed to CHF 3.29B in April, below expectation of CHF 4.85B.

RBNZ Governor Adrian Orr said at a parliamentary committee meeting, “in our projections, conditional to the economic outlook continuing to unfold as anticipated, about this time next year if not further on we see ourselves in a positive position of being able to start to normalize monetary conditions towards somewhat neutral position.”

As for the NZD 100B Large Scale Asset Purchase program, it will continue at the current rate through to June 2022. Any changes to the purchases will be driven by market functioning.

From Australia, private capital expenditure rose 6.3% in Q1, versus expectation of 2.2%.

Intraday bias in GBP/USD stays neutral and further rise is expected with 1.4098 support intact. On the upside, decisive break of 1.4240 will resume larger up trend for 1.4376 key resistance next.. On the downside, firm break of 1.4098 support will suggest rejection by 1.4240 resistance. Consolidation from 1.4240 would be then starting another falling leg. Intraday bias will be turned back to the downside for 1.4008 resistance turned support first. 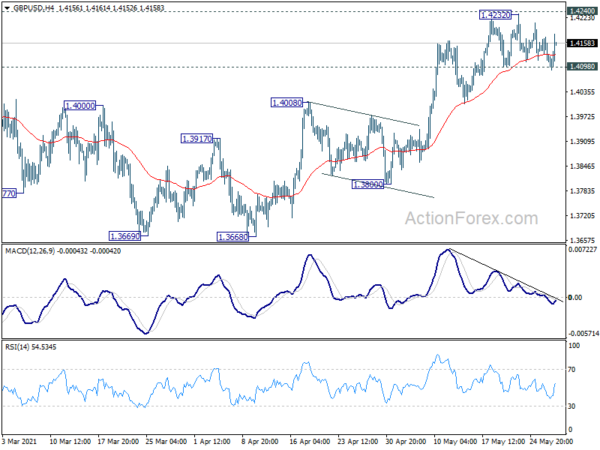 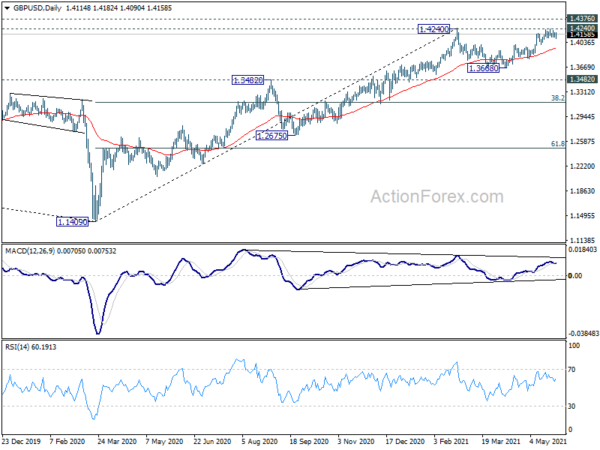