German DAX trade to a new all-time high today. France’s CAC traded to its highest level since 2000 this week

the European shares are ending the day mostly higher. The exception is the Spain’s Ibex which is down around -0.5%. For the week, the major indices are mostly higher again with Spain’s Ibex trading in the red. The German DAX traded to a new all-time high at 15705.89. France’s CAC traded to its highs level since 2000 at 6522.23 during yesterday’s trade. The high price today fell just short of that level at 6517.93.

The provisional closes are showing:

For the trading week, the major indices moved higher with again the exception being the Spanish Ibex:

A look around the markets, as London/European traders look to exit shows:

In the US stock market, the major indices are higher led by the NASDAQ index:

In the US debt market, the yields are sharply lower with the 10 year leading the way at -6.1 basis points. The two – 10 year spread is down to 141.88 basis points which is well below the 147.05 closing level from yesterday’s trading.

In the forex market, the US dollar remains the weakest of the majors, but is off it’s lowest levels as there may be some squaring up ahead of the London/European close. The AUD remains the strongest. It is trading at/near session highs. 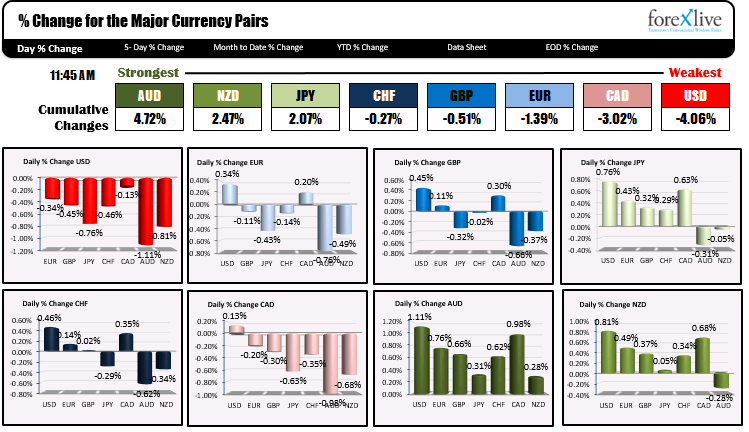