Update: CCIV shares are falling further on Monday as many retail stocks suffer. Most of the crypto related stocks are lower as Bitcoin falls. CCIV shares have retreatd to the 21-day moving average a key short term support level. A break here and volume dries up leading to a test of $21.25 support.

NYSE:CCIV seems to be stuck in neutral as the stock fell yet again on Friday to close out what at first appeared to be a bullish outbreak late last week. On Friday, shares of CCIV dipped by 0.64% to close the trading session at $23.40. Growth stocks and much of the broader markets were forced to deal with the volatility that comes on the quarterly quad-witching day, so it should come as no surprise to investors that CCIV struggled to move.

Stay up to speed with hot stocks’ news!

Lucid Motors did announce via its Twitter account that it is opening a new studio store location in the Meatpacking District of Manhattan. Lucid has been busy setting up showcases around North America to garner attention for the upcoming release of its Lucid Air sedan. The new location comes alongside a large push by Lucid for the third and fourth quarters of 2021, where it is also planning on opening new studio locations in key areas like Seattle, Denver, Houston, Dallas, Vancouver, and San Diego, amongst others. 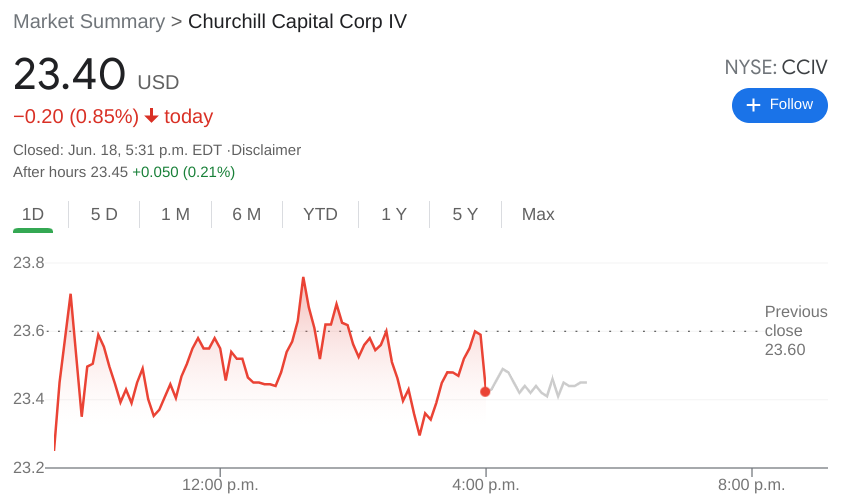 Lucid also released some more information about its DreamDrive driver assistance system that is set to be included in its Lucid Air vehicles. Lucid is banking on the 32-sensor system to provide a competitive advantage over rivals like Tesla (NASDAQ:TSLA) which has seen increasing controversy around its autonomous driving systems. Alphabet (NASDAQ:GOOGL) backed Waymo, was also making headlines this week after one of its self-driving vehicles was in an accident with a scooter, although thankfully there were no serious injuries.