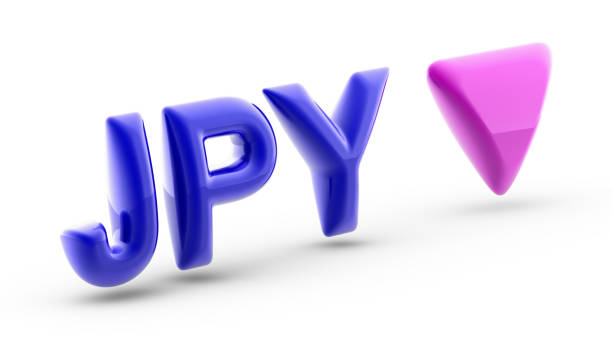 Japanese yen is the worst performing major currency against US dollar in 1H21. A more hawkish Fed and actual inflation (divergent monetary policy), widening yield differential and inflation expectations are the key drivers to yen’s depreciation. In the second half of the year, persistence of these drivers could further strengthen USDJPY, though to a lesser extent after a strong first half. 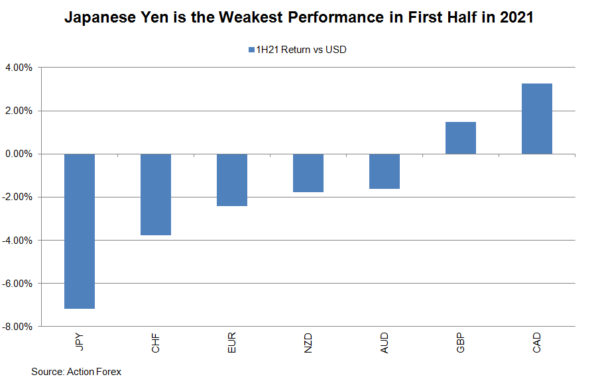 Fed’s hawkish turn in June surprised the market. The median dot plots project two rate hikes in 2023, compared with no rate hike until 2024 previously. This has precipitated the divergence in monetary policy between the Fed and the BOJ. At the June BOJ meeting, the central bank left all monetary policy measures unchanged despite more upbeat economic assessments. The target for short-term interest rates was left at -0.1% and for long-term yields around 0%. The central bank also extended by 6 months the September deadline for its asset-buying and loan program. Meanwhile, a new climate change scheme will be rolled out later this year to stimulate bank loans. We believe this is a move, alongside yield curve control, to boost bank profitability.

Yield differential is a major driver of USDJPY movement. Year-to-date, the correlation between US-JP 10-year yield spread and USDJPY is +0.92, compared with +0.6 in 1H20 and historical average of about +0.5. Such strong positive correlation suggests that further rise in US relative to Japanese yields should support USDJPY. US Treasury yields have risen since the beginning of the year amidst rising inflation expectations. Despite a pullback in May, a hawkish Fed in June has again lifted yields. Japanese yields lack rising pressure. currently trading at 0.06%, the 10-year JGB yield has never breached 0.2%, partly due to BOJ’s yield curve control and partly due to the negative policy rate. 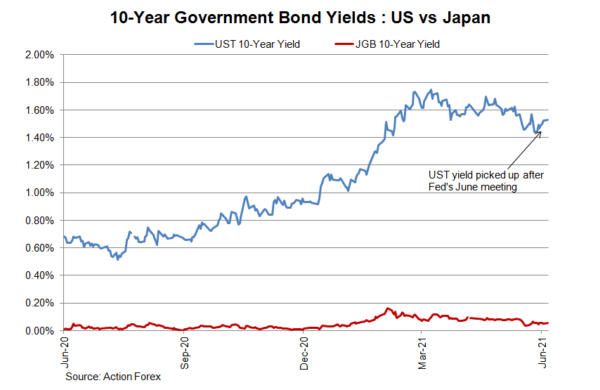 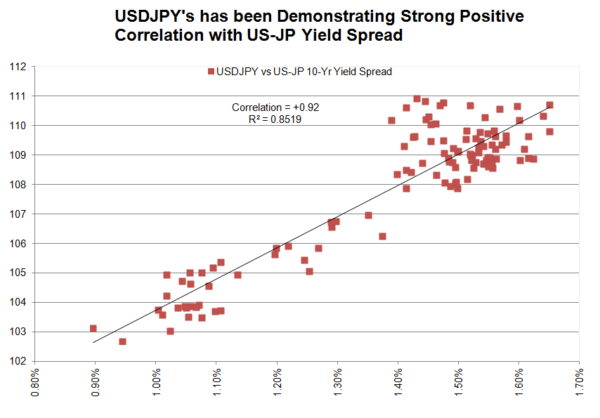 Japan continues to struggle with economic contraction. GDP sank by an annualized -3.9% q/q in 1Q21, after expansion in 3Q20 and 4Q20. Preliminary PMI readings suggest that economic activities remain in contraction in the second quarter. The flash composite output PMI slipped -1 point to 47.8 in June, compared with a final reading of 48.8 in May. The manufacturing PMI sank to 49.1 from May’s final reading of 53.7, while the services PMI edged higher to 47.2 from May’s 46.5. On the contrary, the US economic expanded an annualized +6.1% q/q in 1Q21, accelerating from +4.3% in 4Q20. The strength will likely carry on. The US ISM manufacturing PMI rose to 61.2 in May, up from 60.7 in April, The services PMI also gained 1.3 ppts to 64 last month. A reading above 50 signals expansion while below 50 signals contraction.

While other major economies have seen spikes in inflation, Japan is immune from it. Staying in deflation since October 2020, headline CPI slipped -0.1% y/y in May. Core CPI edged +0.1% y/y in May, after staying in the negative territory since August. Note that the official core CPI is headline CPI less fresh food price only. It is more appropriate to consider the core-core CPI (headline CPI less fresh food and energy prices) which slipped -0.2% y/y in both April and May. BOJ at the June meeting noted that, while “prices could be pushed up depending on the situation regarding vaccinations”, inflationary pressure would be “only transitory, partly due to an entrenched deflationary mindset”. 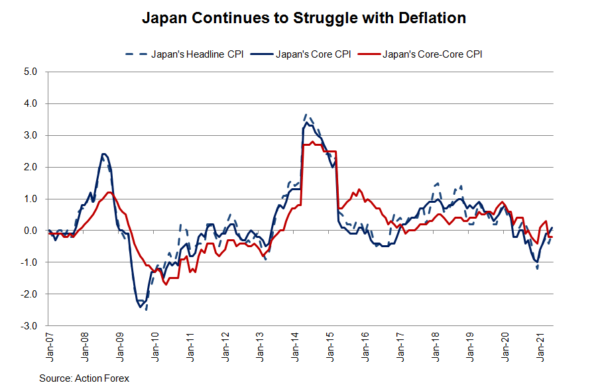 In the US, headline and core CPI accelerated to +5% y/y and +3.8% y/y, respectively in May. Inflation expectations have remained firm and gained traction again after the June FOMC meeting. Divergence in inflation and inflation expectations should precipitate yield differential between the US and Japan, thereby lending further support to USDJPY. 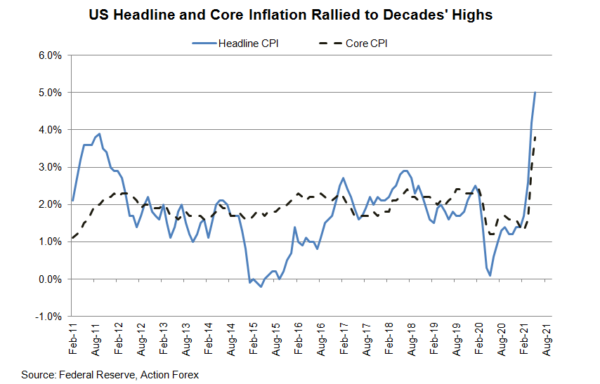 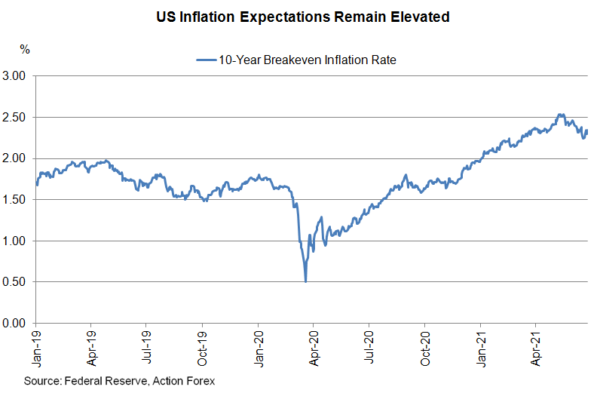 Highly PROFITABLE Trading Strategy with Only 1 Indicator!
AMD beats on sales and profit but warns of a 10% revenue decline in Q1
GBP/USD Price Analysis: Finds resistance around 1.2400 amid Fed-BoE policy-inspired volatility
Risk stays on the defensive so far on the day
The JPY is the strongest and the AUD is the weakest as the NA session begins