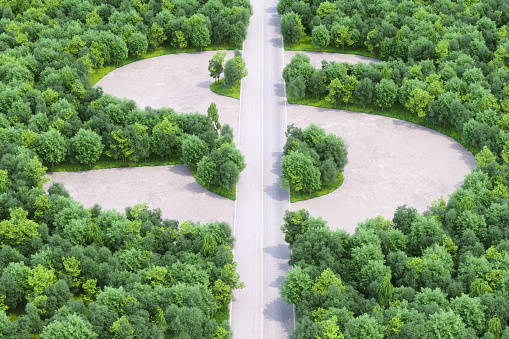 Dollar soars broadly, together with benchmark treasury yields, after an all around strong non-farm payroll report. At the same times US futures tumble, apparently on expectations Fed’s tightening pace will continue with such healthy job market. The greenback is now the strongest one for the week and the question is, whether it could break through some key near term levels before weekly close.

Technically, the most important level to monitor is 1.0095 minor support in EUR/USD. Firm break there will argue that medium term down trend is ready to resume through 0.9951 low. GBP/USD has already made progress on breaking 1.20623 minor support. USD/JPY also breaks 134.58 minor resistance. These two are both Dollar positive developments. 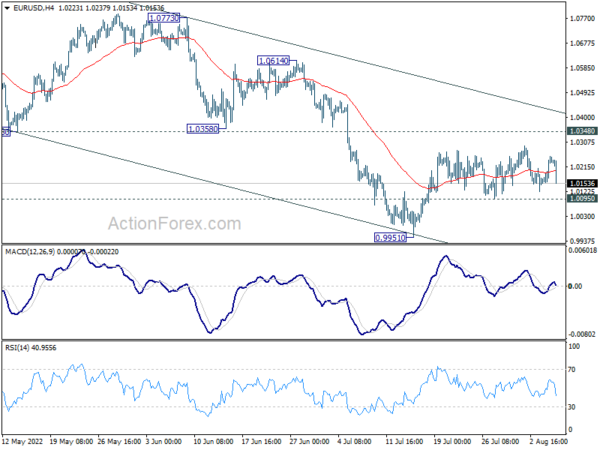 US NFP grew 528k in Jul, unemployment rate down to 3.5%, strong wage growth

US non-farm payroll employment grew strongly by 528k in July, well above expectation of 250k. That’s also much higher than the average gain of 388k over the prior 4 months. Total non-farm employment has also reached its pre-pandemic level.

Unemployment rate was unchanged at 4.9%, below expectation of 5.0%, but matched the historic low reached in June. Total hours worked were down -0.5%. Average hourly wages was up 5.2% yoy.

BoE Governor Andrew Bailey said at the Today Programme that the real risks is import inflation from energy and food becomes “embedded”. As firms are not struggling to raise prices, inflation would be comes worse when its embedded.

“The first thing they (businesses) want to talk to me about is that businesses have trouble hiring people, and that is still going on. They’re also saying to us actually they’re not finding it difficult to raise prices at the moment. That can’t go on,” he said.

Bailey also said the interest rates are not going to go back to pre-2008 financial crisis levels. Additionally, “we don’t think that the rolling back of QE and the sale of assets is going to have a big impact on market interest rates”.

BoE Pill: We need flexibility on rates according to circumstances

BoE Chief Economist Huw Pill told Bloomberg Television, the BoE is not “behind the curve” on tightening.

But he added that investors should not assume there will be another 50bps rate hike in September. “Given the uncertainties we face, I think we need flexibility either to go further, or to stay where we are, and the pace at which we go further to be varied according to circumstances,” he said. 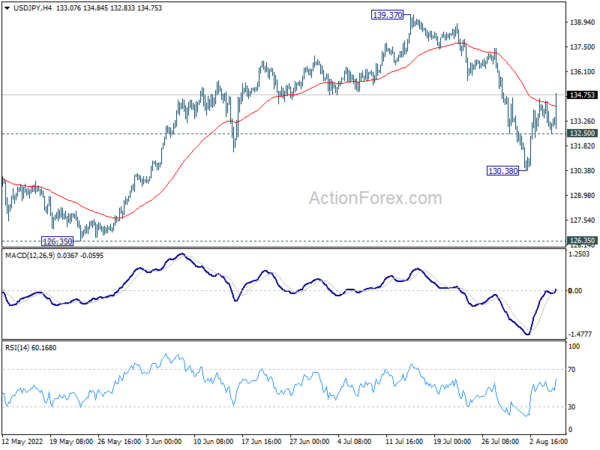 In the bigger picture, a medium term top should be in place at 139.37, on bearish divergence condition in daily MACD. Fall from there could be correcting whole up trend from 101.18 (2020 low). While deeper decline cannot be ruled out, outlook will stays bullish as long as 55 week EMA (now at 121.84) holds. Long term up trend is expected to resume through 139.37 at a later stage, after the correction finishes. 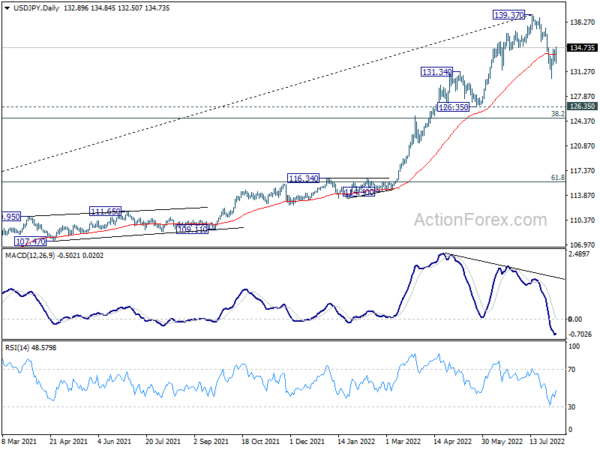